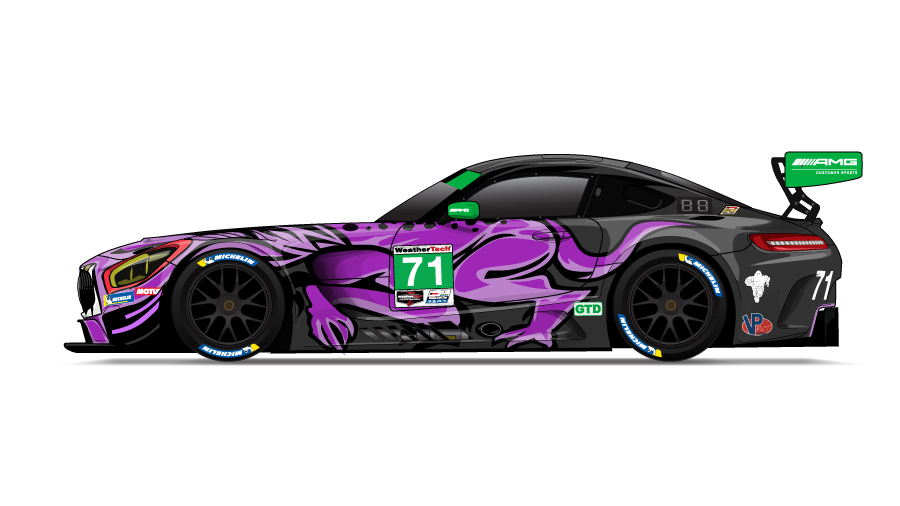 While P1 Motorsports was a relatively new team in the world of sportscar racing, they made a huge impact in the IMSA WeatherTech Championship and the Lamborghini Super Trofeo North American and European championship in the short time they existed 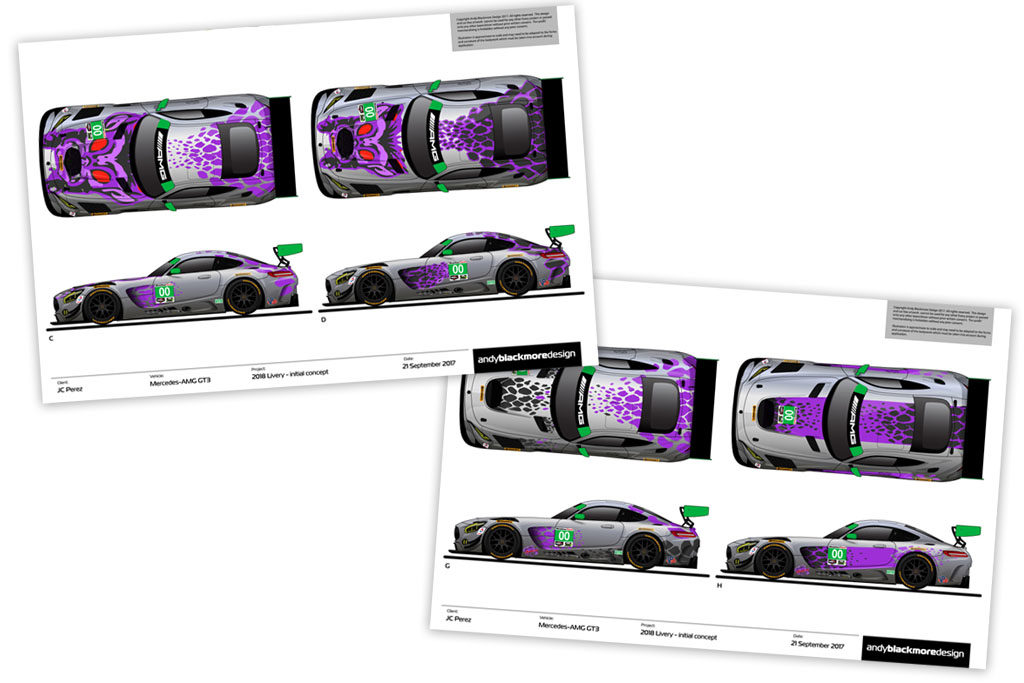 Owner, driver, JC Perez contacted me in 2017 to design a livery for their new Mercedes AMG GT3 racer. As a Columbian, JC had grow up knowing all about the mythical creature ‘The Chupacabra’, which allegedly kills and drinks the blood from cattle! 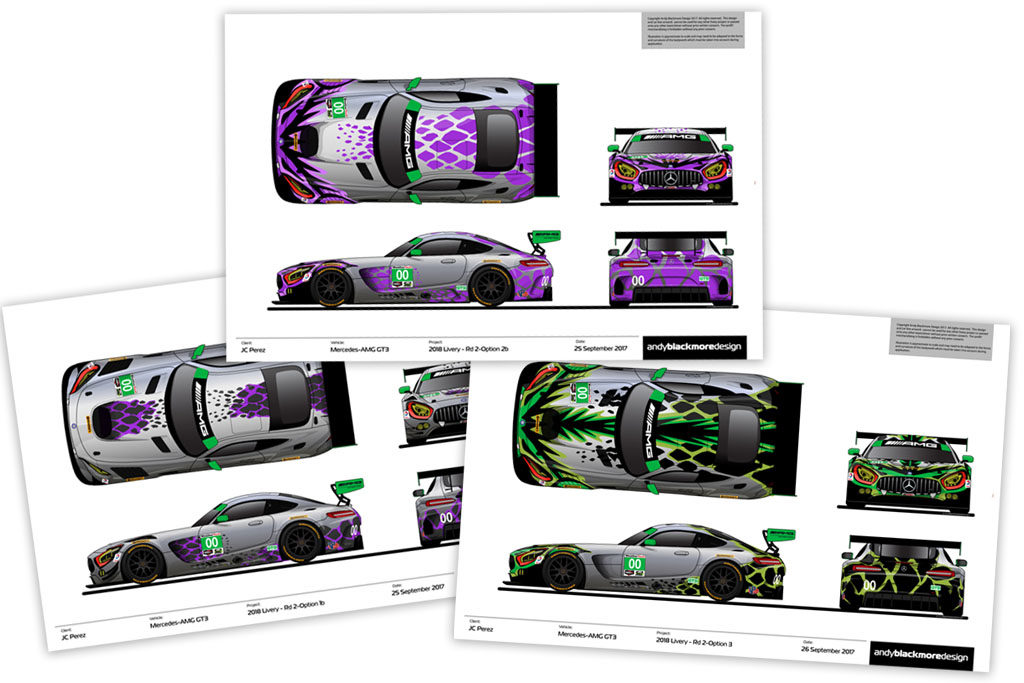 JC wanted to incorporate this character into the livery. Initial discussions focused on the Chupacabra on the side of the car, similar to Red Bull or Jaguar branding, but I’ve always liked where you can incorporate animals into the form of the car. The old AAR Eagle and more recently the Aldo Falla designed Dale Coyne Indycars spring to mind, so I started exploring more of an ‘art car’ approach.

It took a few rounds of design to make this work, but we finally had a concept which was unique, and once launched became a huge fan favourite. 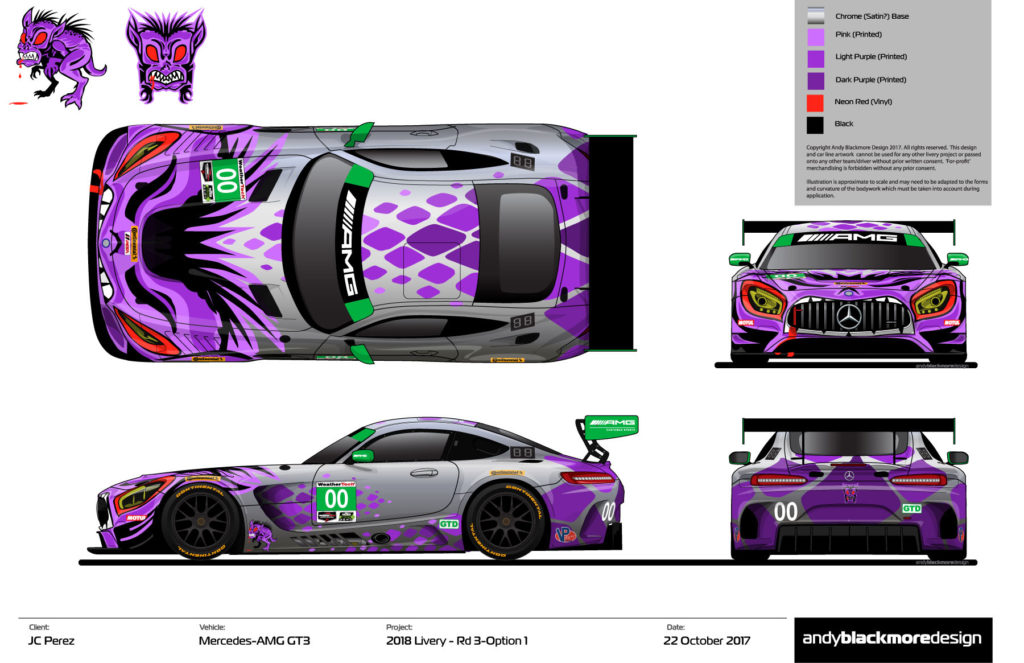 Chrome base was requested, which can be a challenge as this can disguise light and dark branding depending on light so a bold design was required. I managed to convince the team to go with a Satin version! 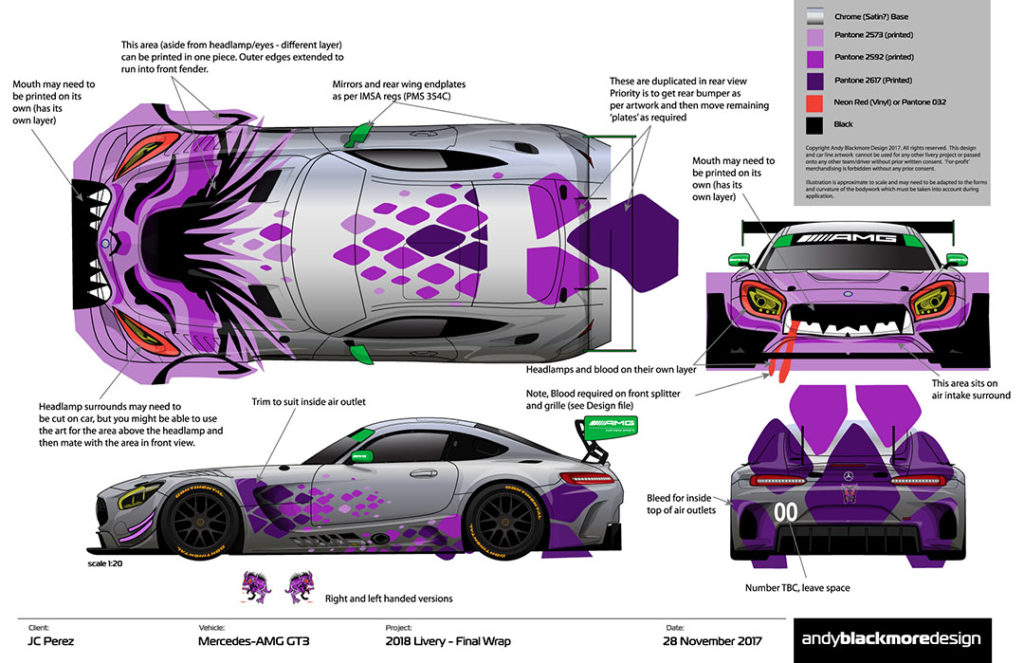 This was a very hard car to wrap! You can see all the parts seperated out for Intack Graphics in Florida, to install. 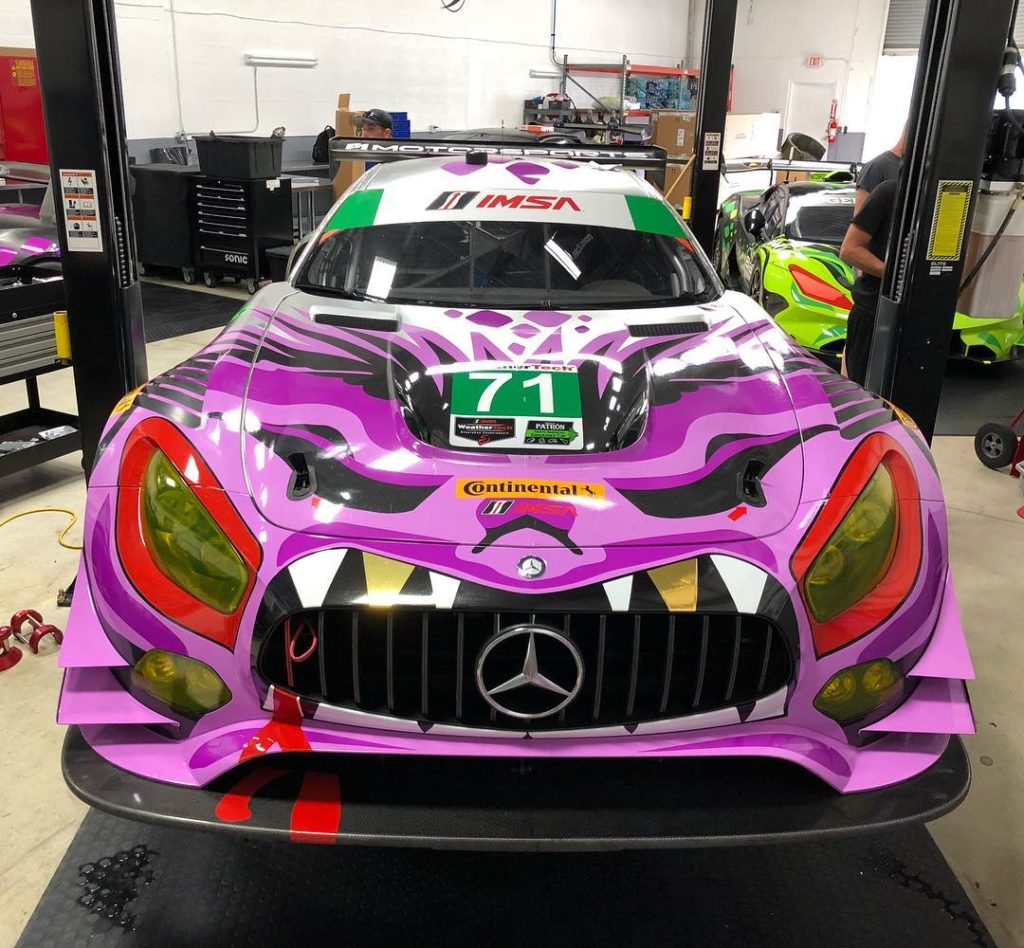 Wrapping the mouth around the grille worked really well, complete with the addition of dripping blood and later, gold teeth added by the team. 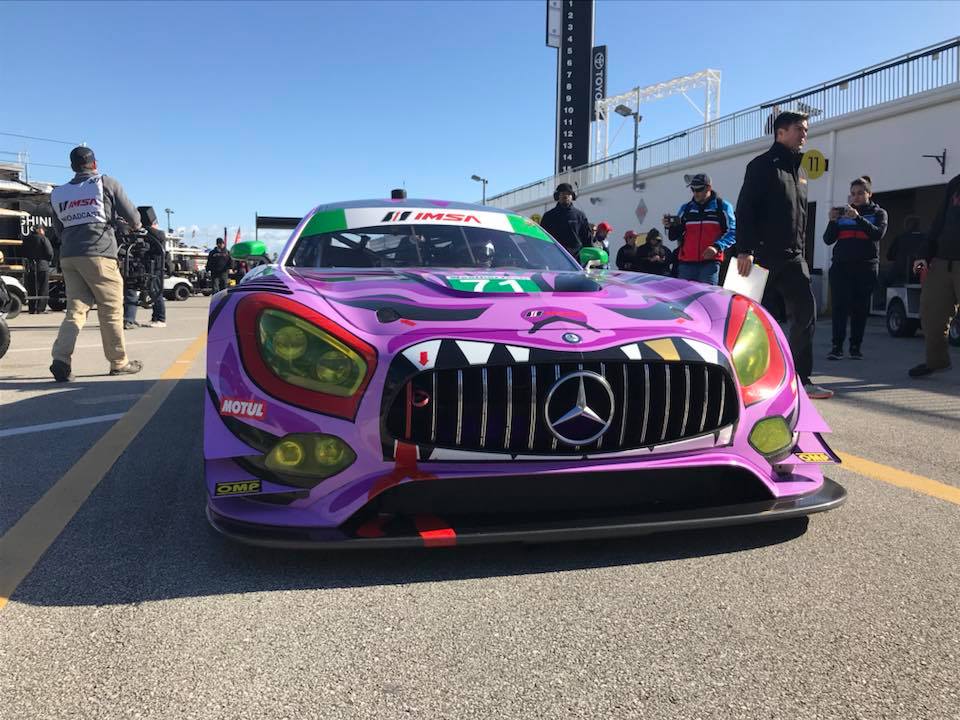 The car made its debut at the ROAR test, ahead of the Rolex 24 and was an immediate favorite. Despite being a part-time entry in the GTD class, its been used to showcase IMSA racing online and in press, making the front page of Floridan papers for Daytona and Sebring. 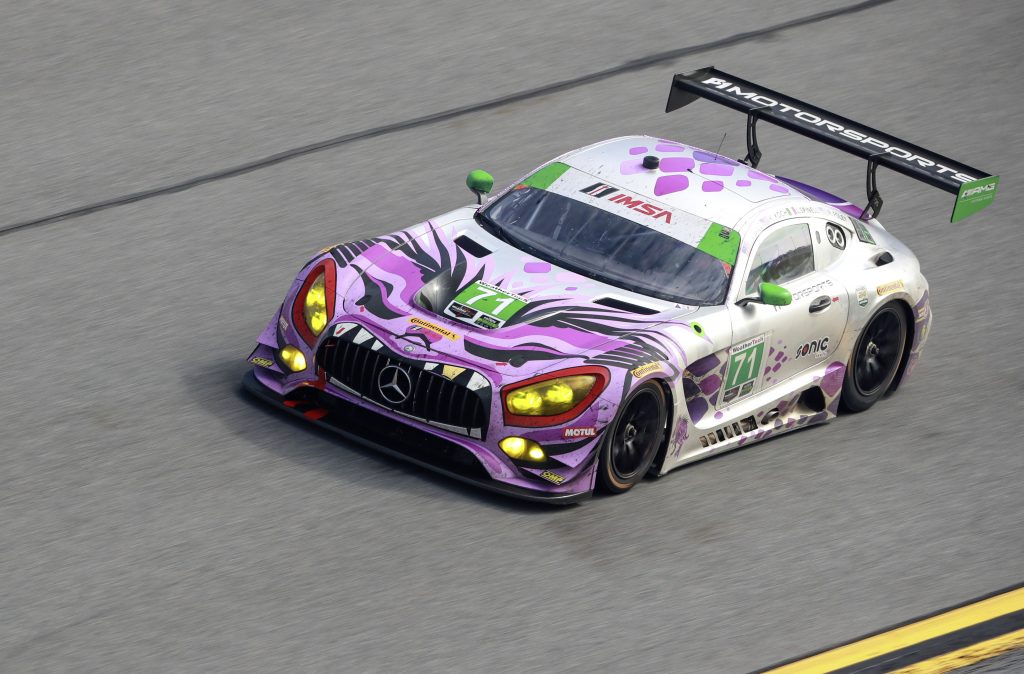 P1 Motorsports ere also running a Lamborghini Huracan Super Trofeo Evo in the North American Lamborghini series and with the Chupacabra so well received, the team wanted a design developed for this different car. 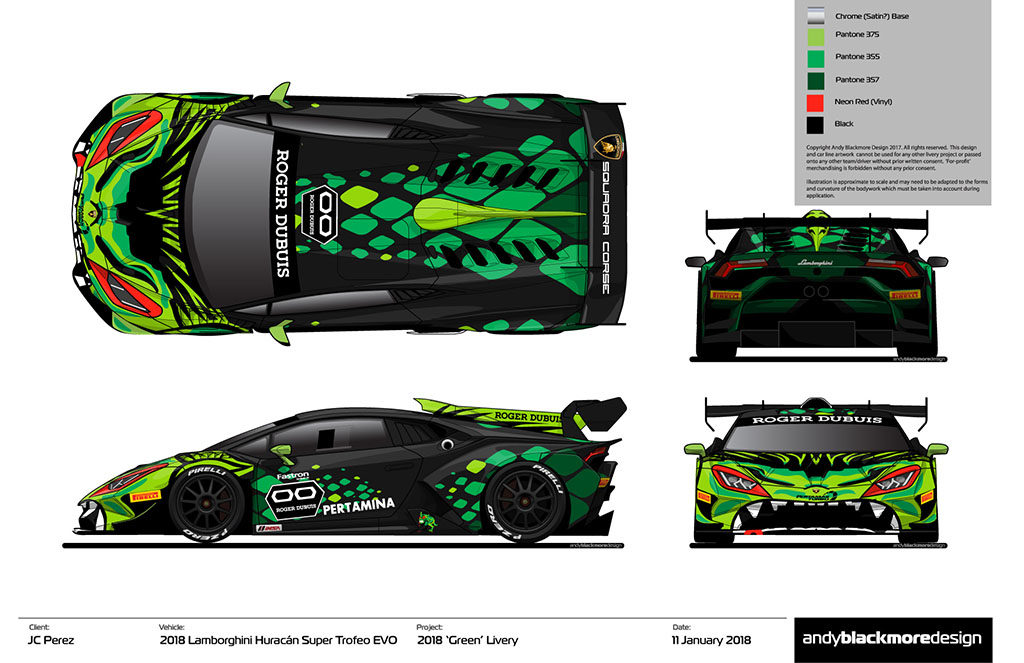 We kept a carbon base for this and produced a couple of different colorways for different drivers with the green being the lead car. 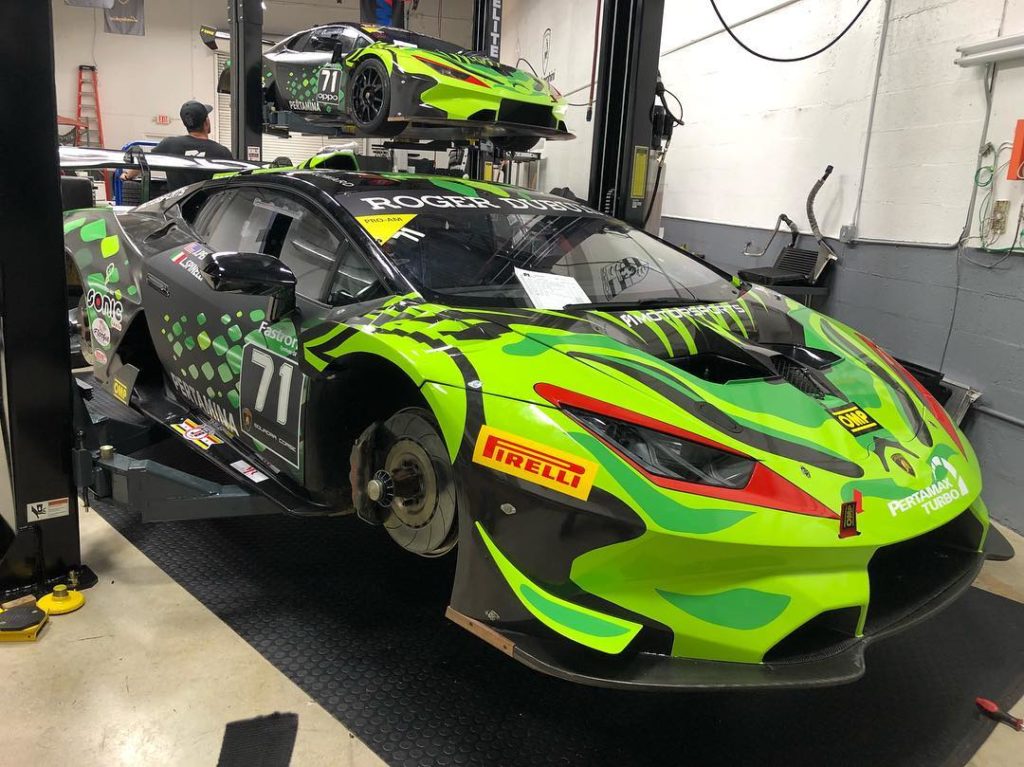 Despite the different form, it worked well. The original design featured teeth, but the team decided to leave this off on the Huracan. The ‘plates’ on the back of the Chupacabra extend onto the unique vertical fin. 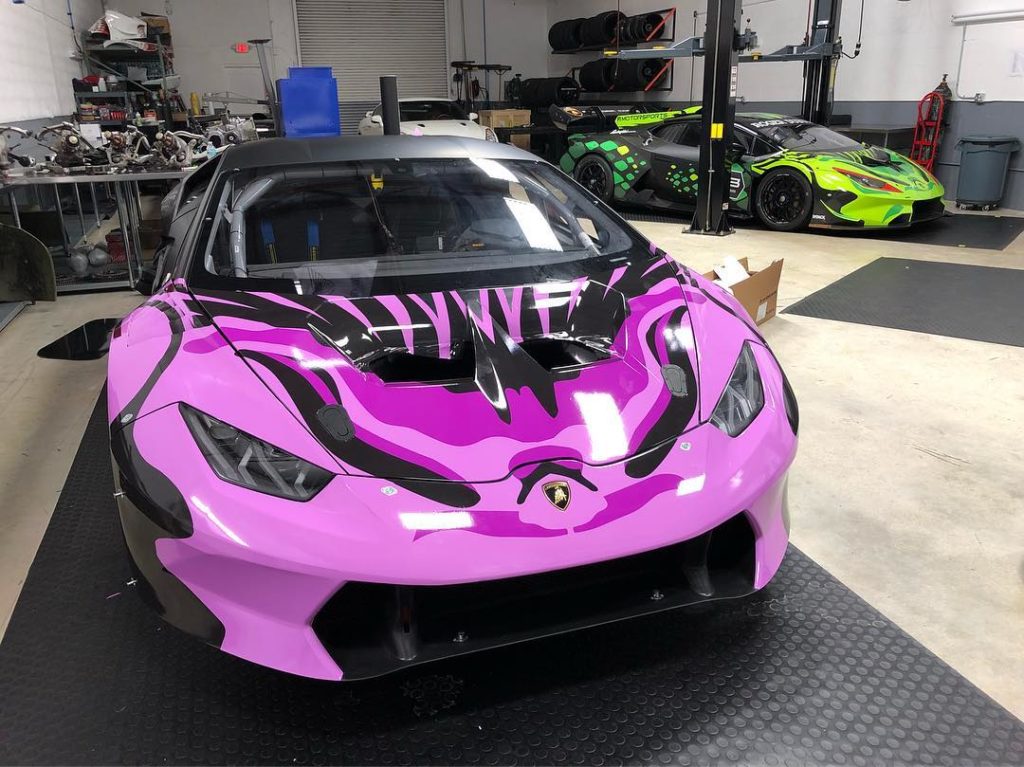 This design was also added to a Huracan GT3 with pink and purple accents.

In addition, I was able to design race uniforms (above) t-shirt designs and assist on a few other liveries for their IMSA Prototype Challenge entries. 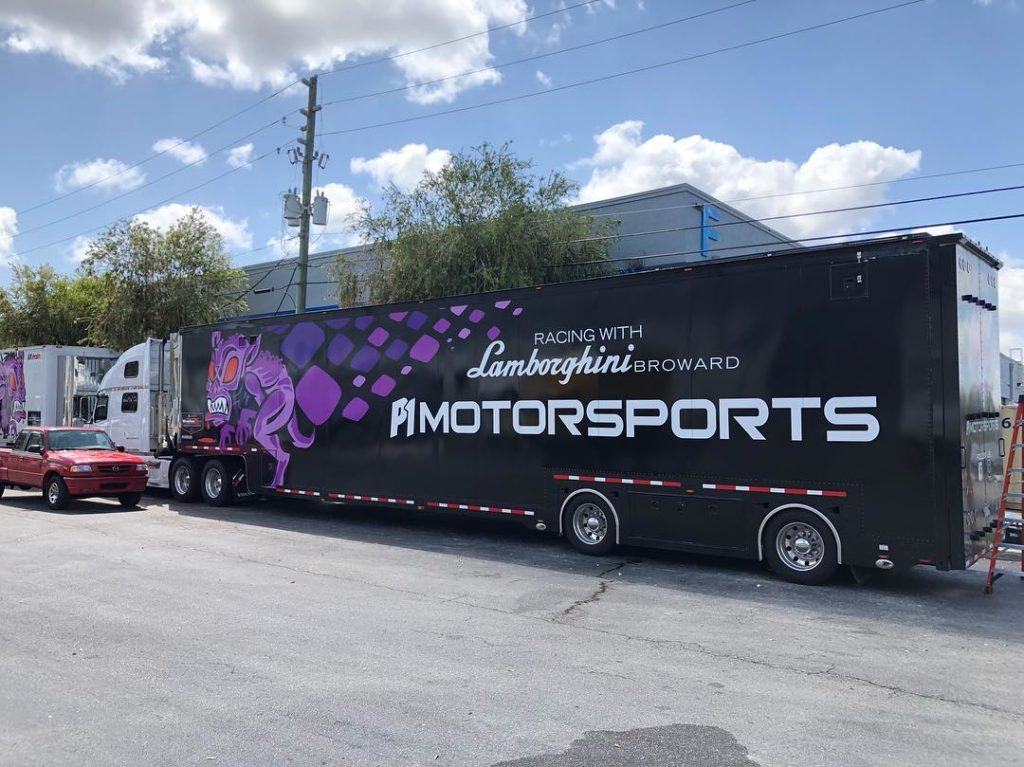 We updated the design for 2019 with new chassis for the team and an expansion to the newly renamed SRO North Amercia Championship. 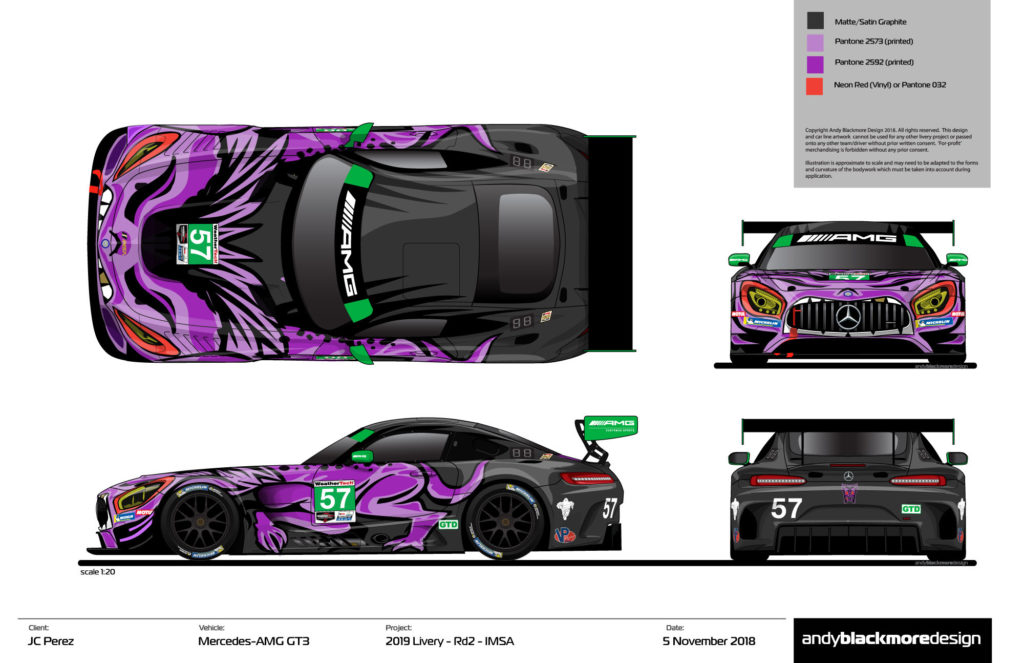 Base color for the new cars was a Matte Graphite and we reworked Chupacabra deign so it extneded to the side. I had a few attempts at this illustration before I was happy. 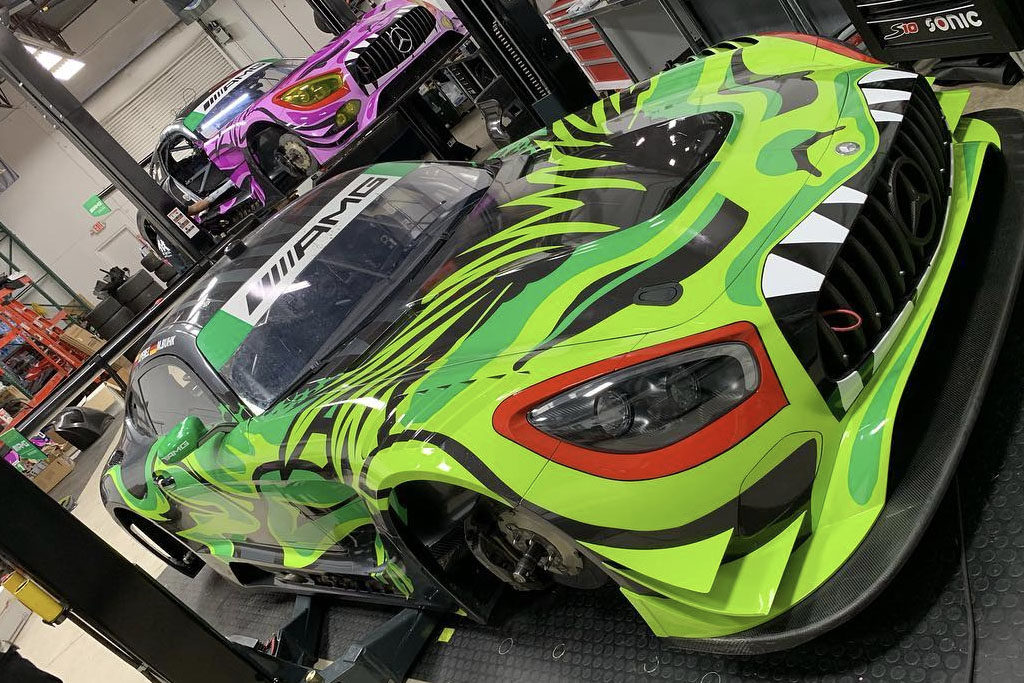 I needed it to work around the IMSA and SRO number panel rules which differ. 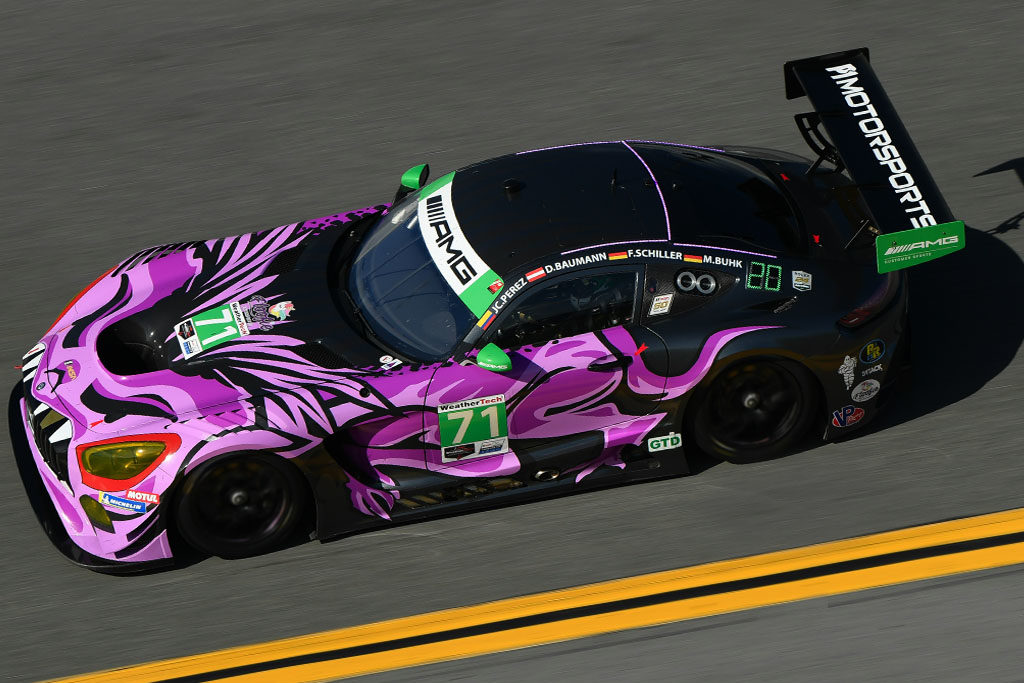 The SRO car used the Green previously used on the Lamborghinis.  The design came out really well. 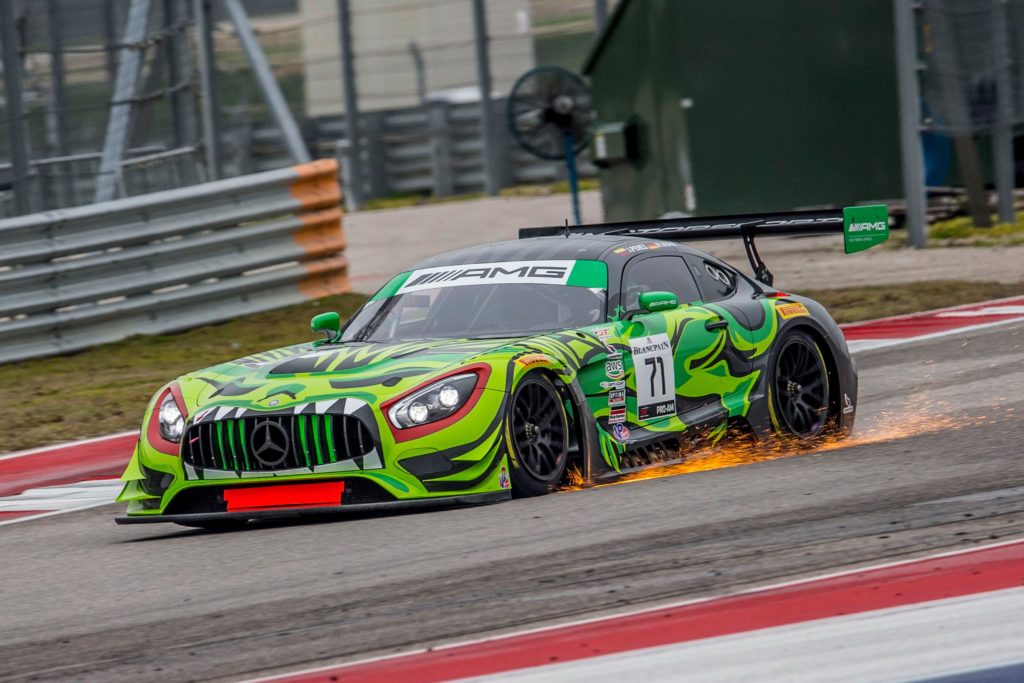 Over in the Lamborghini Super Trofeo series, the 2019 entry was also revised, wrapped by Intack Graphics, but based heavily on an all green proposal I did for the team in late 2018. 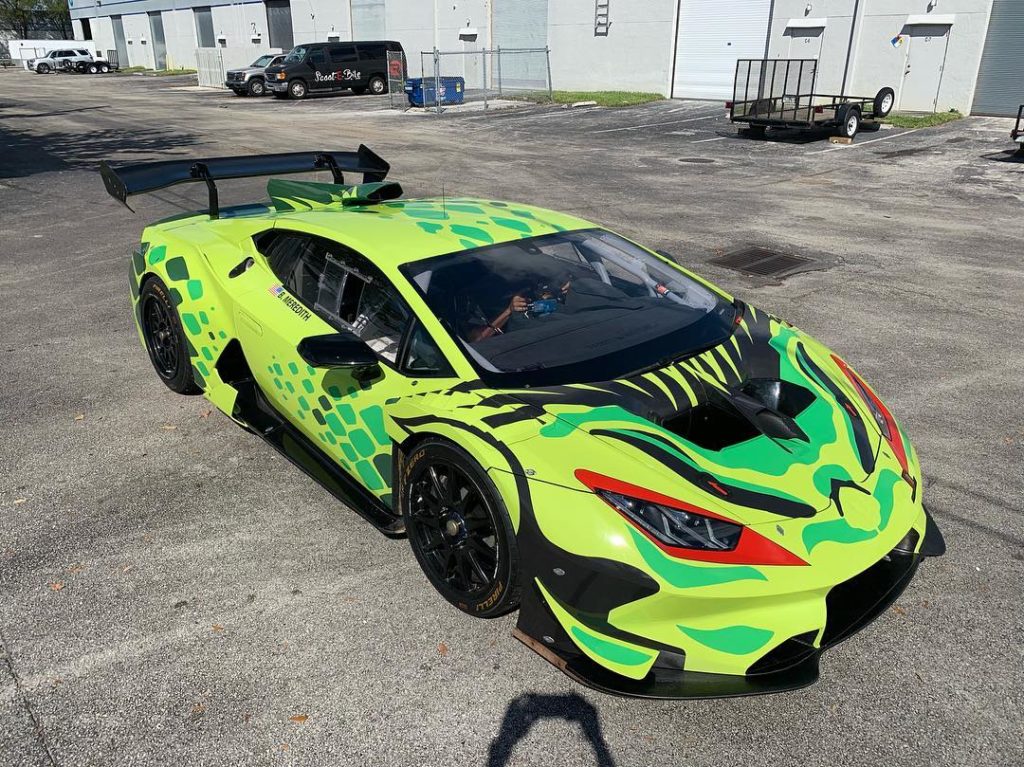 This was an exciting project with lots of creativity which pushed the boundaries. It’s a breath of fresh air to have free reign and not have issues with sponsor branding, corporate identity etc. 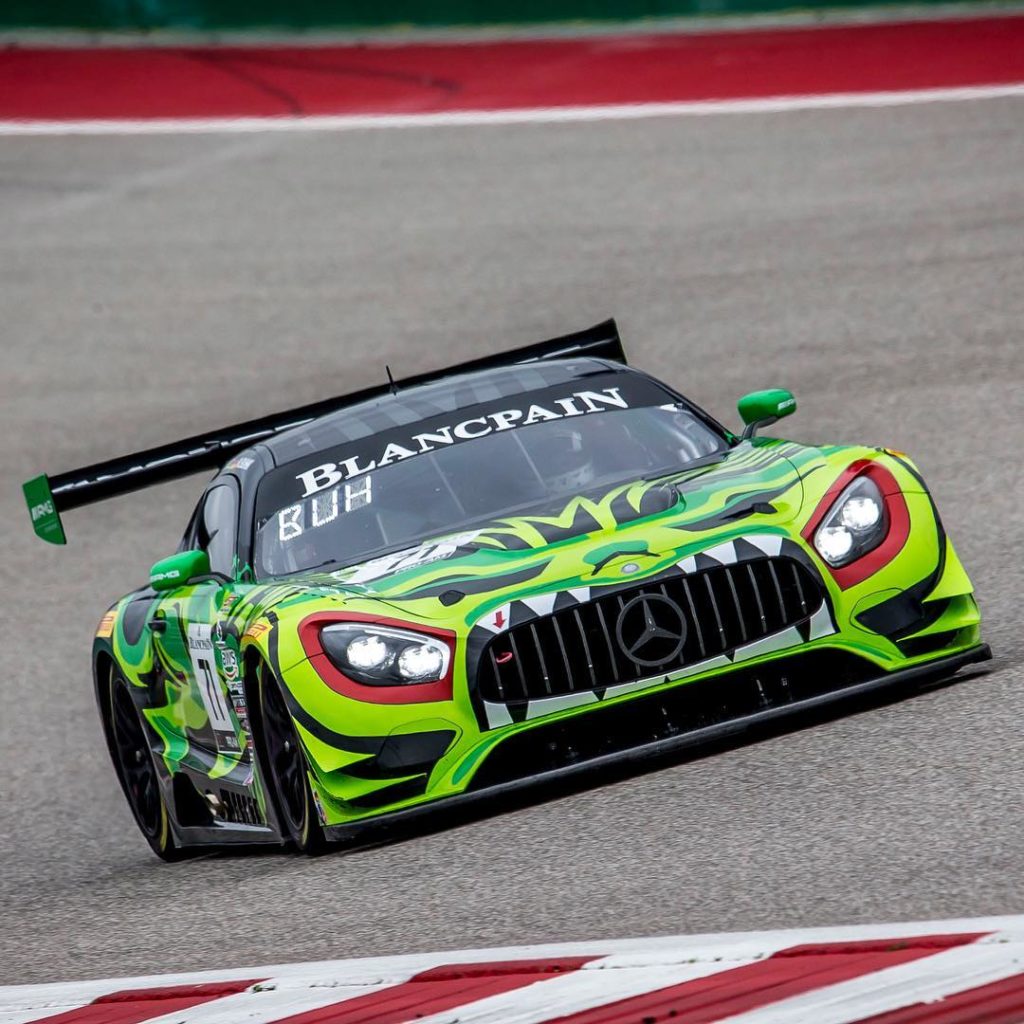 Other creative artwork was also produced for the team. 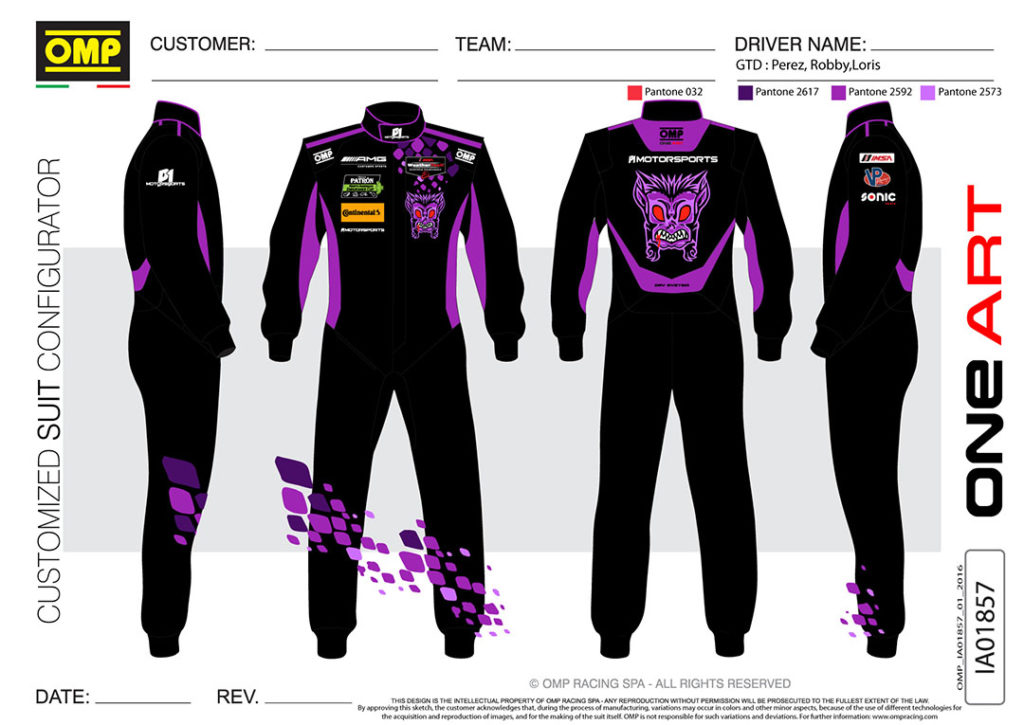